The Trail of Tears – Why and What Happened 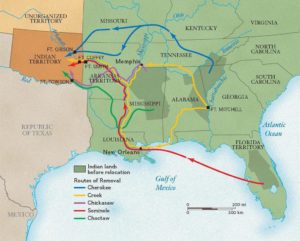 Oklahoma was part of the Louisiana purchase and primarily unsettled. The Government felt it was a good area to relocate the Indian Tribes living in the South. The government had their reasons for wanting the land the Indian tribes occupied. The railroad lines were being built and crossing Tribal land was necessary and was being met with much opposition by the Tribes. The Railroad brought more people needing land for homes and settlements. Rich Cotton and tobacco growers needed more land to expand their crops and each was pressuring the government.

Gold was discovered on Indian Tribal land at Coker Creek Tennessee. The discovery caused a Gold Rush of people invading the area. When word was received of an Indian uprising possibility, President Jackson sent a regiment of soldiers to build a fort and keep outsiders from trespassing. But this failed as many of the soldiers had gold fever themselves and only added to the problem.

The five peaceful civilized tribes located in what is now known as Tennessee, North Carolina, Alabama, Florida, South Carolina, and Kentucky were forced to leave their homes and land and make the nearly 5000-mile journey to Oklahoma. Many were taken from their homes with no provisions but the clothes they wore.

From the time span of the treaty signing to removal was two years. Ample time to make preparation and obtain supplies and transportation for the long journey. But as the deadline approached and orders were given to troops to round up the Cherokee and hold them at the many forts, built for this purpose, the lack of preparation was apparent. As was the timing to make the journey. The Cherokee were the last tribe to make the journey. Several Cherokee hid in the mountains and avoided capture and removal. While about 800 Cherokee living along the remote Oconaluftee River were not subjected to the Trail of Tears because Principal Chief Yonaguska, with the help of his adopted European-American son, William Holland Thomas, managed to get an okay for him and his small band to remain where they were. A Cherokee named Tsali, with a small group resisted the U.S. Army removal. He was eventually captured and executed in exchange for the lives of those with him. However, those were made to give up their Cherokee Tribal citizenship and assimilate as US Citizens and thus state citizens as well.

Many lives were lost in transit by the Creek, Chickasaw, Choctaw and Seminole tribes as well as Cherokee who made the long sad journey to Oklahoma. Several Thousand died from malnourishment, Cold, and Sickness before reaching their new land. In history this became known as, The Trail Of Tears, or as recorded from of the survivors, “The Trail Of Tears and Death.”

There were a few hundred Cherokee Indians, no more than 500, who didn’t resist the move to Oklahoma Territory and were present at the treaty signing in Macon County, NC. These made the journey without mishap or any loss of life.

While much pressure was being put on all the remaining Tribes in the south to relocate. All the tribes resisted, determined to stay in the land of their ancestors. Chief John Ross, a Cherokee Chief, himself, represented the tribes in Washington and argued they were a civilized people with every right to remain on the land of their ancestors. He pointed out that they had a governing system much like that of the white man. That they were peaceful and lived and worked well with the neighboring settlers. However, President Jackson lost patience with Chief Ross who continued, not giving up, expressing objections to the terms to cede all the land East of the Mississippi. Approximately 7 million acres for the sum of $5 million dollars. In the end, President Jackson sent a commissioner to negotiate with the Treaty Party. The article Treaty of New Echota was signed in December 1835. Not more than 500 Cherokee backed the treaty terms and everybody involved in the treaty signing was aware of its illegitimacy. All three, Major Ridge, John Ridge, and Elias Boudinot all signed their death warrant with the signing of the treaty. All three were killed the same day, at different locations, June 1839, at the hand of their fellow Cherokee. Their effort, a position they were forced into, to acquiesce the US Government backfired costing not just their lives but the lives of thousands of Native Americans along The Trail of Tears or Trail of Tears and Death.