The History of Cherokee County NC 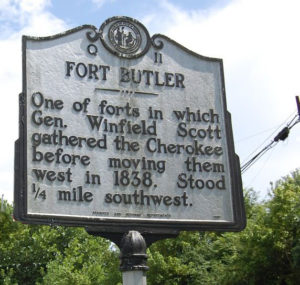 In the 1820s one of the first white men settled in this area and built a log cabin. He then established a trading post near an Indian settlement at the junction of two rivers. We now know these rivers as the Hiwassee river and Valley river. This area was in the eastern part of present-day Cherokee County N.C. Known as “Valleytown”. The man’s name was A.R.S. Hunter. He traded with the Indians and then the soldiers, who were sent to remove the Indians and escort them on what became known as “The Trail of Tears”.

In 1837 a man named James Whitaker had a trading post near this same area known as “Jamestown”. The area was called “Konehetee” by the Cherokee meaning “valley”. With more settlers coming and settling in this long valley, once again the name was changed to “ Valleytown”. The Cherokee name for Valley River was “gunahita” meaning “long”.

From the headwaters in the east portion of Cherokee County, at present-day “Topton”, to below the present day, “Town of Murphy”, the Valley River flows to meet the Hiwassee River then flows into the TVA controlled lake Hiwassee.

After the removal of the Cherokee, by the government, all the land, almost 7 million acres, was made available to pioneer settlers, plantation owners, and the railroad. Those that applied pressure to Andrew Jackson to make more land available.

This large area of land (7 million acres) covered miles in distance and was covered in many resources sought after.

“The treaty of Echota” was signed in Echota, GA and this gave Macon County a judicial claim to the land. However, the NC State legislature found a need for another state representative in government. To take care of this problem, in 1839 the western end of Macon County (the land formerly occupied by the Cherokee tribe) was taken from Macon County to become a separate county, named Cherokee, after the tribe that once occupied the land.

Then in 1861, this happened again when the southeast part of Cherokee County became Clay County NC, named after Henry Clay, a US Congressman and Presidential candidate from Kentucky who was defeated.

10 years later in 1872, it happens again, the northeast portion of Cherokee County became Graham County NC, named for William A. Graham, a US State Senator and the 30th Governor of North Carolina. Mr. Graham also ran for Vice President of the United States but was defeated.

The 7 million acres mentioned being taken from the Cherokee included land located in the states of Georgia, Tennessee, South Carolina, and Alabama belonging to the Cherokee before removal to Oklahoma.